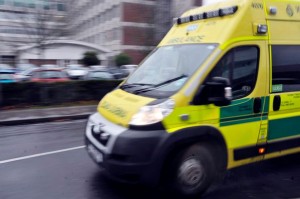 A two-month-old kid suffered severe head injuries after they were thrown from the rear of a taxi in an accident on the M6 main road close to Coventry yesterday evening.

Police are currently appealing for witnesses to the horrific accident, that happened on the exit access road at junction two northward, at Walsgrave, at about 6.10pm

They hope different drivers is also able to facilitate them piece along however the black taxi over up overturning, flinging the trot right out of the rear of the cab.

The Warwickshire & Northtonshire Air ambulance known as to the scene, alongside ambulances, a paraprofessional officer & a BASICS doctor from West Midlands ambulance Service.

The two-month-old kid boy had been travel at the side of his folks & different youngsters. The sister & different children were additionally taken to hospital following the crash.

The child was airlifted to Birmingham Children’s Hospital wherever they was aforementioned to be fighting forever, however miraculously rallied nowadays & police said it was thought his injuries were now not severe.

“A two-month-old kid boy was thrown away from the vehicle. The child treated for severe head injuries & airlifted to Birmingham Children’s Hospital.

The sister of the boy, who unhurt within the incident, cosmopolitan with the child to the hospital.

A woman in her 30s treated for back pain. He immobilized with the utilization of a neck collar & spinal board.”

They aforementioned the opposite youngsters; a boy aged & little ladies aged & six, were treated for minor injuries.

All patients were taken to the close University Hospital in Coventry.

Warwickshire Police had currently launched an inquiry the incident & officers would like to pay attention to from anyone who witnessed it, or saw the vehicle & the style within which it absolutely was being driven before the collision occurred. For more taxi and transport information to visit the best UK recommended Putney MiniCab

Anyone with information is asked to contact Sgt Ian Williams at Warwickshire Police on 01926 415415.