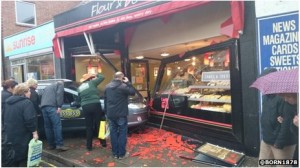 A woman was injured after the taxi she was travelling in ploughed into a bakery shop in Norfolk.

The vehicle smashed into the window of the Flour and Bean café on Gorleston High Street at about 09:30 GMT.

The East of England Ambulance Service said a woman in her 40s, who was in the car, was treated for minor injuries at the scene.

A spokesman for Anglia Taxis said the driver was not injured.

Kerry Smith, 45, manager of the café, said: “There was an almighty crash. Read more